In this tutorial you will learn how to use the expression engine built into MobiFlight. You will learn tips and tricks and you will see that you can unlock a lot of new potential to your configurations.

MobiFlight is programmed to be particularly user-friendly. In order to be able to adapt the values read by the simulator to instruments, steppers, servos or digital displays, the possibility was created to adapt these values using formulas.

The NCALC module is the basis for the calculations in MobiFlight. Those interested can read it here:

The following basic rules apply to all formulas that are processed in MobiFlight:

A config is required so that formulas can be entered. Formulas can only be entered for outputs (values that are output by the simulator).

To practice with formulas, we first need a config in the Outputs tab, which is to be given a name. On the right in this line is the field with the 3 dots under the heading Edit. 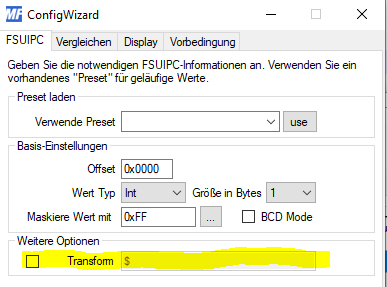 The $ symbol in then transform field always refers to the offset that has been selected in the basic settings. In this case it would be the offset 0x0000. This offset is always specified as the standard by MobiFlight, unless another offset is entered or selected from the preset list.

Now it can happen that I don’t need an offset at all, but simply want a value in MobiFlight with which I want to continue calculating, or, as here, by doing simple calculations that do not refer to a simulator value

If no simulator value is desired, the $ sign can be removed from the transform line and I simply enter a 1 or any other number that I would like to refer to later.
More on this in Part 5.

So it is possible that I "create" my own values with a transform line.

The result of a transform is always an integer value, never a float or a string! Transform cannot process strings either. If a float value is required, it can be obtained by multiplication by pulling the relevant decimal places forward by multiplying by 10, 100, 1000 etc.

Assuming the value of an offset is 2020. Then I can edit or change it using the 4 basic arithmetic operations.

In order to be able to show this with an example number, the offset 0x0240 (Zulu Year in FS) was used.

Probably the most frequently used formula is the conversion of the frequency values that the simulator returns (P3D / FSX). The value read is e.g. 2280. In order to make the displayed frequency of 122.80 from this, the following is written in the transform line:

The screenshot shows the conversion here. The simulator reads the value 2280 and the output value is 12280. The decimal point is then defined in the display and 122.80 appears on the display.

In the meantime there are newer versions of FSUIPC in which other offsets are used for these frequencies, where this addition is no longer necessary because the frequency is output in Hz

But here, too, you can adapt the display so that it fits the corresponding 5 or 6-digit display.

What is rounding required for? The transform line always outputs an integer as the result. Integer means something like the whole number part of a number, or also whole number. Fractions after the decimal point are not displayed, but are carried internally to the result. FSUIPC provides a number of offsets in which any amount has to be calculated. Understandable, if the numbers don't always come out in the evenings.

In order to make the values ​​more precise, it is multiplied or divided at one point or another and the result would be numbers with decimal places.

In order to have these relatively exact, they are rounded. Either up or down.

How is the rounding carried out?

The syntax is: Round(number, decimal places)

The capital "R" is important for the Round command. If the formula is written with a small "r", nothing happens or MF aborts with an error. round () also does not work. Please pay attention!

Number is any number, the content of an offset or the result of a calculation.

Round(7.6,0) rounds the result up to 8. This means that 0 takes into account the 1st number after the decimal point when rounding.

The 2nd digit after the decimal place is now significant for rounding. It rounds off to 7.60.

This is due to the fact that MF internally ignores 7.6 in the calculation as long as the 2nd decimal place is less than or equal to 4.

This also works with the 3rd and every subsequent decimal place.

So it is important to know what to round off as an offset ($) or value in my calculation.

If I need the 3rd position after a comma for a value because I need this for further processing, it makes sense to multiply the value by 100 from the start and then focus on the 1st decimal place.

So much for the rounding of numbers and the Round command in MobiFlight.

Formulas with Conditions – IF

If I want to influence the behavior of MobiFlight in such a way that actions are dependent on certain values, I cannot avoid setting conditions and evaluating them.

The IF command is used for this.

As a reminder: the $ symbol is a placeholder for the offset that we selected above.

Granted, a simple example, but it's just meant to show the possibilities.

The (relational) operator equal (=) can also be:

In addition to the relational operators, there are also the logical operators. These are

For example, if I want to control an LED with an offset, I also have this option if the offset value is not just 0 or 1:

Assuming the offset value changes in the range from 0 and 100 and I want to control an LED in the range 80 to 90, then this can be done as follows:

That can now be increased.

What happens now if the offset value is outside of these two ranges, e.g. at 55?

The 2nd "else" condition takes effect, which results in a 0 as output. The LED stays off.

It is possible to combine more than two If-conditions and choose the values ​​as they are needed.

It is important to close the brackets again at the end, otherwise MF cannot perform the correct calculation.

If you would like more information on modulo invoices, please use this link:

Modulo is basically nothing more than a division by a number that leaves a remainder as a result. What is interesting is not what comes out of the division, but the rest.

The modulo does not show how often B fits into A, but how big the remainder C is.

So much for the theory. Why do we need something like this in MobiFlight?

The COM frequencies in the older simulators are in the 25 kHz grid.

If I now want to display the 3rd position in the COM devices, I take the basic frequency of the simulator, here 2000 and add the value 10000 to this and then get 12000 in the display. With the decimal definition in the display tab, this becomes 120.00.

In order to display the 6th position correctly, I use the modulo calculation.

For the 6th position, i.e. the 3rd position after the decimal, I use the same offset and write the following formula in the transform line:

If the result of the modulo calculation is 0 with 5, then 0 should be output as the last digit, otherwise 5.

With this frequency grid, there is always a 5 at the end if the frequency that the simulator delivers ends on 2 or 7.

The application possibilities of the modulo calculations are very diverse and a real help.

At this point, part 1 of working with formulas ends. If you liked the guide and if you want to know more, read Part 2, which deals with the comparison of values.

Then I switch from the FSUIPC tab to the Compare tab, set the checkmark, and select smaller than (<). The value 10000 is entered in the field next to it. <=9999 also works.

As can be seen, a 1 is put out at 9900ft and this should turn on the LED, which is then selected under the Display tab.

Several formulas are possible here, which have the same result, e.g.

If the value in the AP is now increased to 10,000ft, the following picture appears:

The output value changes to 0, as soon as the current value reaches 10,000ft or more.

In contrast to the transform line, it is also possible to work with texts here.

Instead of 0 or 1, a text can be the output here. Of course, this depends on the settings of the Display tab. This would not be possible with a 7-segment display, but i.e. with an LCD.

With a 7-segment display, the display can virtually be deleted by entering the space bar five times for the “set it to” value,  and simply setting the “else set it to” value to the offset value ($)

In Compare, a formula can be used instead of a number.

Preconditions are intended to ensure that configurations can only become active when the precondition selected for them is active.

In turn, this means that configurations are inactive as long as the precondition(s) are not or no longer fulfilled.

Even though the tab is called precondition, it is possible to define several preconditions.

If several preconditions are used, they are linked together, which means that they are logically put in relation to each other.

For logical links, a truth table can be used for a better understanding. A truth table gives information about all the possible combinations of the input conditions and the corresponding truth value of the total statement.

In this truth table, the overall statement (C) is true only if the two preconditions (A) and (B) are also true.

If for both truth tables a switch is chosen for preconditions (A) and (B), then a downstream lamp will be lit if the overall statement (C) is true.

In every configuration it is possible to define as many preconditions as desired or required.

It should be noted that preconditions are either AND or OR linked and are processed accordingly in sequence.

If there is still an AND or OR after the last condition, it can be ignored, since it has no function (in a later version this will be left out, because it can lead to confusion).

Popular in this context is the representation of LEDs and displays, which should only show something if the Battery_Master_Switch is switched on.